This freshwater mussel is almost round in outline, usually flattened laterally, and ranges up to 2 inches in diameter. The shell has a shallow depression running from the umbo (beak) to the ventral margin which is bumpy and wrinkled. The shell also has distinctive rays.

This species is an obligate riverine species found in mud, sand, gravel and cobble substrate, generally associated with less than three feet of water. Historically found in low densities in the Fall, Verdigris, Neosho, and Spring Rivers. Appears to be extirpated from the Neosho River. Surveys from 2000-2010 have documented populations in the Verdigris and Spring Rivers. 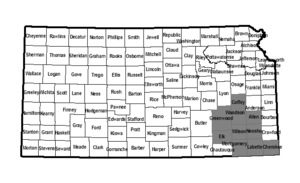 Western Fanshell Mussels are protected by the Kansas Nongame and Endangered Species Conservation Act and administrative regulations applicable thereto. Any time an eligible project is proposed that will impact the species’ preferred habitats within its probable range, the project sponsor must contact the Ecological Services Section, Kansas Department of Wildlife, Parks and Tourism, 512 SE 25th Ave., Pratt, Kansas 67124-8174. Department personnel can then advise the project sponsor on permit requirements.