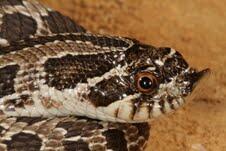 The Western Hognose Snake is generally found in grassland or sand prairie in the western two-thirds of Kansas reaching its peak abundance on the High Plains. Its range extends east to the Flint Hills with a few isolated records along the western boarder of the Osage Cuestas. Most records in the eastern part of the state are probably from isolated populations in sandy areas. Their home range is quite variable, depending on available habitat and food. This animal is not territorial. Population density may be as much as one to three snakes per acre.
Although they usually mate during May after emergence from winter inactivity, a few matings occur in the fall. The number of eggs per clutch varies from 4-23 with an average of 9. They are laid in July in nests a few inches below the soil. Evidently, females deposit a clutch every other year. They detect their prey by smell and dig a food item from its burrow beneath the soil. Their upturned snout makes it very efficient at digging up toads, reptile eggs, small lizards, and snakes. They also consume rodents and birds when they can capture them. 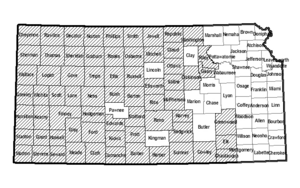