Coyotes in the City 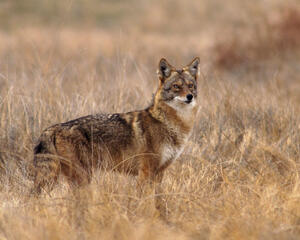 Coyotes have lived in larger cities of other states for decades, but they are a relatively recent addition to urban areas in Kansas.

Highly adaptable, coyotes often inhabit parks and undeveloped edges, but they will travel into residential or commercial areas, primarily at night. Some learn to live in highly populated and busy parts of a city.

Similar to rural coyotes, urban coyotes form packs and maintain defined home ranges. Rodents, deer (often vehicle killed), fruit and rabbits make up most of their diet, with trash and pet food generally being minimal. Vehicle strikes are the most frequent cause of urban coyote mortality.

Should I Be Concerned?

This new top-tiered predator in the urban landscape presents unique challenges. Merely seeing a coyote is not cause for alarm, but when coyotes are present, basic precautions can prevent potential problems.

Coyotes will prey on cats and small- and medium–sized dogs, and pet predation is the most common complaint. All precautions should be exercised to protect pets.

Generally, coyotes do not attack people. In areas where coyotes are rarely removed, coyotes may lose their fear of people and become a problem that escalates when a person, usually a child, is bitten or attacked. This is rare, almost never fatal, and has not occurred in Kansas. However, people living with urban coyotes need to be aware of the risks, recognize problem coyote behaviors, and understand how to reinforce a negative association with people.

How to Avoid Conflicts

When Should Removal Be Considered?

The mere presence of a coyote is not a reason for removal. If one is removed, another will likely take its place. People should take the precautions listed in this pamphlet to keep coyotes from becoming a problem.

As coyotes become more visible during the day, spend more time in yards and begin to attack pets, removal becomes a consideration. It is up to residents, homeowners’ associations, or municipalities to determine when removal efforts are necessary. Sometimes a single coyote is responsible for the conflict and removing it may solve the problem.

When a coyote approaches people without fear, watches and shows an interest in children, attacks pets walked on a leash, or fails to flee or reacts aggressively
(growl, bark) to attempts to scare it away, removal is recommended.

Call the regional KDWPT office nearest you for more information

How Can a Coyote Be Removed?

Coyote removal can be difficult and is costly. It is often controversial, with issues arising about removal techniques and what is going to be done with the coyote.

In rural areas, nuisance coyotes are often either shot or trapped. In urban ares, coyote removal techniques require considerable skill and knowledge and should only be done by qualified individuals who have a thorough understanding of laws, regulations and ordinances. These safe techniques are well-established and based on removal of thousands of coyotes in urban settings.

There are many problems associated with attempting to relocate nuisance coyotes, making lethal control the preferred and responsible choice.

Who Will Remove a Coyote?

Legal methods under state law and Kansas Department of Wildlife, Parks and Tourism (KDWPT) regulations are often prohibited within cities (e.g., use of some traps or discharge of a firearm/bow). Traditional rural options such as hunter or trapper harvest may not be practical.

K.S.A. 32-1002 allows legal occupants and landowners, after attempting to resolve the problem using non-lethal methods, to kill animals in or around buildings or causing damage to their property.

The best option for coyote removal in urban areas is usually to hire a licensed nuisance wildlife control operator (NWCO) who will remove coyotes for a fee. City and state officials typically do NOT remove urban coyotes.