Zebra Mussel Natural History
How Did They Get Here?
Why Worry About Zebra Mussels?
Preventing Their Spread
Other Zebra Information
Report New Sighting

Where did zebra mussels come from?

Where have zebra mussels been found in Kansas?

Why are zebra mussels a problem? 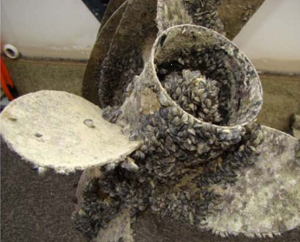 How do zebra mussels spread?

How do we control zebra mussels?

What do I do if I find zebra mussels?

Zebra mussels are a small, bi-valve mollusk with alternating light and dark rings or stripes. These animals are native to the Black and Caspian seas of Western Asia and Eastern Europe that have spread across the world via shipping.

Zebra mussels were first found in North America in 1988 when they were discovered in Lake St. Clair and the Detroit River. It is believed these were the result of mussels that were deposited from trans-Atlantic ships that discharged ballast water into the surrounding water. As a result of barge traffic within the interior waterways and the habit of mussels attaching to hulls of boats, zebra mussels quickly spread through out the Great Lakes and to many inland rivers including the Mississippi, Illinois, Ohio, Tennessee, Arkansas and Hudson. Young mussels have recently been found in the Missouri River.

Although related, zebra mussels differ from our native mussels in several important categories. Perhaps the most important is their ability to produce very large populations in a very short time. Unlike native mussels, zebra mussels do not require a host fish to reproduce. Most zebra mussel produce about 100,000 eggs a year; however, a large female is capable of producing 1 million eggs during the reproductive season. Once fertilized, eggs develop into microscopic veligers. These veligers cannot be seen by the naked eye and can be contained by the thousands in very small quantities of water. Because they cannot be seen, they can easily and unknowingly be spread from one place to another by water held in bilges and live wells. Veligers passively float within the water for up to two weeks before they settle out as young mussels. These young mussels quickly grow to adult size and reproduce during their first summer of life, thus adding to the problem of extremely dense populations.

After settling, zebra mussels develop byssal threads that allow the shells to attach to hard surfaces such as rocks, piers, and flooded timber. They also attach themselves to pipes, water intake structures, boat hulls, propellers, and lower units of out board motors. As populations continue to increase in these areas they can clog intake pipes and prevent water treatment plants and electrical generating plants from drawing water. They also reduce efficiency of boats and pose a threat to engine cooling systems. Removing large quantities of zebra mussels to ensure adequate water supplies can be labor intensive and costly. The water treatment plant in Monroe, MI had to suspend operation and power plants in the Great Lakes area have experienced power outages because intake lines became clogged with zebra mussels. Some power plants now spend more than $250,000 a year to clean pipes of zebra mussels and protect their internal plumbing from infestation. Naturally these costs are passed to consumers via higher monthly bills.

Zebra mussels are also very efficient at filtering food from the water. Because of this ability and their large populations they compete with native mussels and young fish for food. A single mussel can filter over a quart of water a day, so when multiplied by the millions of animals found in relatively small areas (over 200,000 have been found per square meter in the Great Lakes), these animals can easily filter most of the water in a lake. They can also filter smaller particles than our native mussels and fish eat thus preventing food from reaching a size that is usable by our native animals. Food particles that are unusable by zebra mussels are collected and excreted in a form that is unusable to native fish and mussels, further compounding their ability to reduce natural food supplies.

This ability to filter large volumes of water has lead to increased water clarity in lakes where zebra mussels have become established. Because of this, many people mistakenly credit zebra mussels with better water quality and improved fishing conditions. Unfortunately, clearer water does not equal cleaner water. Because zebra mussels often filter out beneficial animals from the water, they have been known to increase the number of toxic blue green algae blooms by removing predators that would limit blue green algae. Furthermore, dissolved oxygen is lower in area of zebra mussel beds because of the wastes they secrete into the water. Fishing may improve for a time after zebra mussels have become established, but reduced microscopic food particles in the water may decrease survival of young fish and therefore reduced populations in future years.

Dead zebra mussel shells have contributed to lower property values and the loss of water front recreation in the Great Lakes. Dead and dying mussels that wash onto shore create an unwanted stench and sharp shells cut the feet of those trying to swim or wade thus distracting from the enjoyment of water front users.

What affect will they have in Kansas? As yet, we do not know. There is reason to hope that the greater number of fish species that will eat zebra mussels in Kansas will check their population growth so we do not see the extreme problems experienced elsewhere.

How did they get here? We do not know. They may have arrived accidentally attached to a boat that came from an infected lake, or they may have been stocked purposely by someone thinking they were doing the right thing.

Will they spread to other lakes? Now that they are here, it is more likely they could spread. However, their spread is totally dependent on how people react. Zebra mussels have been controlled in Minnesota by an aggressive informational campaign and through the vigilance of the public.

Can zebra mussels they be controlled with chemicals? To some extent yes. But, any chemical that kills zebra mussels will also kill other animals and may be dangerous to humans as well. This is also very costly.

Does anything eat zebra mussels? Several fish and ducks are known to consume them. Channel catfish, blue catfish, freshwater drum, smallmouth buffalo, river carpsucker, redear sunfish, and common carp will eat zebra mussels. So will common scaup. However, because of the fertility of zebra mussels, it is unlikely these animals will be able to control them. All these animals reside somewhere in Kansas.

The spread of zebra mussels could be likened to a tax increase for all Kansans. Every one who uses water will be affected because of the cost to control zebra mussels. Water treatment plants will have to frequently inspect their intake pipes and may need to change their filtering systems. Electrical generating plants may need to add expensive filter systems and pay increased wages to inspect sensitive intake areas. Boaters will need to inspect their boats and pay extra to clean hulls and cooling systems.

Man’s activities are the greatest threat for spreading zebra mussels and other unwanted species such as white perch and Eurasian water milfoil. Therefore, we can control the spread of zebra mussels by being vigilant and taking a few extra minutes to clean our boats, and being careful not to transport water or bait from one lakes to another.

How Did They Get Here?

The zebra mussel escaped from its homeland in the Black and Caspian seas in the 1700s and emigrated to western Europe. From there, it hitched a ride in the ballast tanks of ships across the Atlantic and through the St. Lawrence Seaway to the Great Lakes. Then adults and larvae spread to the Illinois and Misssippi rivers by barge and boat traffic.

Zebra mussels are now present in El Dorado Reservoir and possibly in the river below the lake.

Unlike other freshwater mussel larvae, zebra mussels don’t attach to fish or other hosts prior to adulthood. Consequently, they can easily spread anywhere that water currents, wildlife, or human activities take them. One of the zebra mussel’s most effective means of dispersion is travelling in bilge water of boats.

Why Worry About Zebra Mussels?

If the zebra mussel's westward invasion follows the pattern observed elsewhere, the creature’s population in the Mississippi River will peak in a few years. For the zebra mussel, “peak” population is thousands per square foot, covering every inch of solid surface down to 45 feet.

Zebra mussels can attach to anything firm, including water intakes of power generating plants and municipal water systems. They can accumulate 6 inches deep, severely reducing the flow of water and posing a multibillion-dollar threat to industry, agriculture, and municipal water supplies.

Because of their sheer numbers (females can produce 100,000 eggs per season), zebra mussels can smother native freshwater mussel beds. Other wildlife are vulnerable, too. Zebra mussels are filter feeders, gleaning tiny particles of organic food from the surrounding water. Some observers fear they will deplete the supply of food available to shad, paddlefish and other native species. Add the cost of damage to boats, motors, docks, and other marine equipment, and you have a very expensive scenario.

Boaters and anglers can prevent the spread of zebra mussels to new Kansas waters by carefully checking their boats and trailers. Any water in the bilges or live wells should be drained before leaving the lake. Mud attached to anchors or ropes should be removed, as should any vegetation on boats or trailers. Water users should dry any equipment that has touched the water for 5 days or clean it thoroughly with hot water (~140 degrees F). If hot water is not available, a 10% bleach solution can be used to kill any zebra mussels present but special precautions must be taken to properly disposed of the bleach. Bait should not be transported from one lake or stream to another. Instead, unused bait should be poured onto dry land. Never release bait into a lake. Hunters and wading anglers should clean their boots after leaving an infected lake. REMEMBER: it is against both state and federal law to release zebra mussels. Make sure you do not have zebra mussels or water from zebra mussel infested water with your equipment.

We'd like to know if you think you've found an aquatic nuisance species in an unreported location.