Located just west of the city of Glen Elder, south of the US-24/K-9 and KS128 intersection.

The reservoir covers what once was a mineral spring sacred to many Native Americans and former home of a sanitarium. The Waconda Springs Replica at the park pays tribute to this ill-fated site of Kansas geology and Native American history. At Waconda Heritage Village, a living museum, visit the historic Hopewell Church south of the park office.

Glen Elder Wildlife Area encompasses almost 13,200 land acres surrounding the lake. You can see and photograph a diversity of wildlife species. In winter, bald and golden eagles visit. Deer and pheasant are common sights. Waterfowl stop on their migrations, and a small Canada goose flock makes the area home. 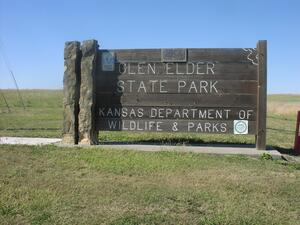 **Waconda Lake is 5.3 below conservation pool**

Boat ramps in the State Park are still usable.

THE KANZA SHOWER BUILDING IS CLOSED UNTIL FURTHER NOTICE.  The lift station pump is not working and we are having a hard time finding repair parts.
The Kaw and Cheyenne shower buildings and the west dump station have been CLOSED for the season.
Free "WiFi" at Glen Elder State Park provided by Cunnningham Telephone & Cable. Hot spots are located at the cabins, several in Kanza, Kaw & Cheyenne areas, and the Marina area.
State regulation 115-8-9 requires all camping units upon completion of 14 consecutive days in a campground must move to a different CAMPGROUND, each person and all property of each person shall be absent from that campground for at least five days.

The park has a storm siren in the Kanza campground that is activated by Mitchell County law enforcement.  Shower buildings and vault toilets are shelters 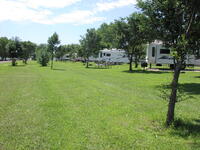 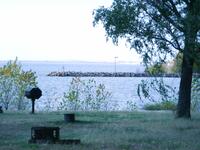 Our web maps are Google-generated; please contact our office for any questions or clarifications.

Contact the park office for current event information at (785)-545-3345 or just EMAIL us, gleneldersp@ksoutdoors.com

The best time to find someone in the office is Monday - Friday 8:00am - 4:00pm. Memorial Day to Labor Day hours extend and open seven days a week.

*Be advised the park office may be closed at any time without prior notice.

**Please call ahead to insure park staff will be in the office when you arrive so we may meet your needs.

KDWP licenses and permits may be purchased at KOALS online, Mitchell County Vendors, or many other locations around the state.

The Waconda Springs Replica at Glen Elder State Park pays tribute to an ill-fated site of Kansas geology and Native American history. The park is located on the northern shore of Glen Elder Reservoir, which is also called Waconda Lake. As part of a flood control effort, the U.S. Bureau of Reclamation began building the lake’s dam across the Solomon River in 1964, and it was completed in 1968.

The resulting lake covered what once was an active mineral spring called Waconda Springs. The spring’s pool was said to be 50 feet in diameter, 15 feet deep and rich in a variety of minerals. Waconda Springs was a sacred, ceremonial gathering place for many of the Native American tribes that lived in the central plains, including Pawnee, Wichita, Kaw, Kiowa, Sioux, Arapaho, Comanche, the Miami, Crow, Cheyenne, Arapaho and others. Kanza tribe members reportedly called the springs, “Wakonda,” meaning “Great Spirit.”

In 1767, the first non-native person is said to have visited the springs. However, the first recorded visit by a non-native occurred in 1806, when General Zebulon Pike (for whom Pike’s Peak is named) altered his route to Colorado to visit the springs. Gradually, more and more non-native people began to migrate to the area and beginning in 1884, the Waconda Springs Sanitarium was built over a ten-year period. Although it saw a variety of uses in its lifetime, the sanitarium stood until it was razed in the early 1960s to make way for the lake. Rubble from the demolition was piled into Waconda Springs before the lake filled.

Also at Glen Elder, travelers can visit the historic Hopewell Church. The church was originally located south of Beloit and was completed in 1878 at the cost of $1,200. It was built by a dedicated congregation that was established in March1876 and met in private homes. By July 1876, the group had grown too large to meet in homes, so in August 1876 they decided to build a 24’ x 40’ frame structure with a six-foot vestibule at one end.

Building the church was quite a challenge. Lumber had to be shipped in, but the nearest railroad terminal was 80 miles away in Greenleaf. It took as much as two weeks to receive a load of lumber. It took two years to build the church and the first congregation met in the new building on February 22, 1876. A number of changes occurred over the subsequent century. The church congregation eventually dwindled and it was forced to close its doors in 1989 after 113 years of service.

In 1994, the church was moved 15 miles to its present location as the first step toward the Waconda Heritage Village Association’s goal of creating a "living" museum dedicated to pioneer heritage and Native American lore.

Engaging stories about Waconda Springs and Hopewell Church can be found on the city of Glen Elder official website at glenelder.com and on the Kansas State Historical Society website at kshs.org. 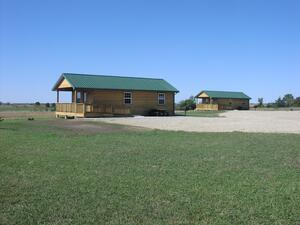 Glen Elder State Park is providing rental cabins as an alternative camping opportunity. You can experience the beauty of the lake from the comfort of one of two modern cabins with most of the comforts of home. The cabins are one bedroom with a full-size bed. A futon bed and a murphy bed are provided in the living area. Kitchens have a small stove with oven, refrigerator/freezer, microwave, toaster, coffee maker, pots & pans, dishes and silverware. Kitchen table and four chairs and picnic table and grill are also provided. Cabins have modern bathrooms with showers as well as air conditioning and heating. Bedding is not provided. You will need to bring your own bedding, towels, & toiletry items. No pets are allowed in the cabins and smoking is prohibited in the cabins.  Non peak season (Nov. 1 thru March 31), peak season (April 1 thru October 31).

For more information on cabins or to make a reservation contact the park office at (785)545-3345 or go to https://www.reserveamerica.com 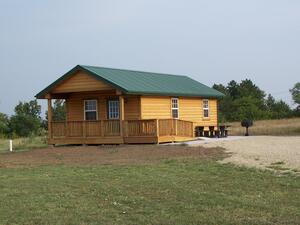 This form allows you to email Glen Elder State Park with any questions you might have about the State Park and its facilities. This includes season openings and closings, campsite reservations, special events, etc.